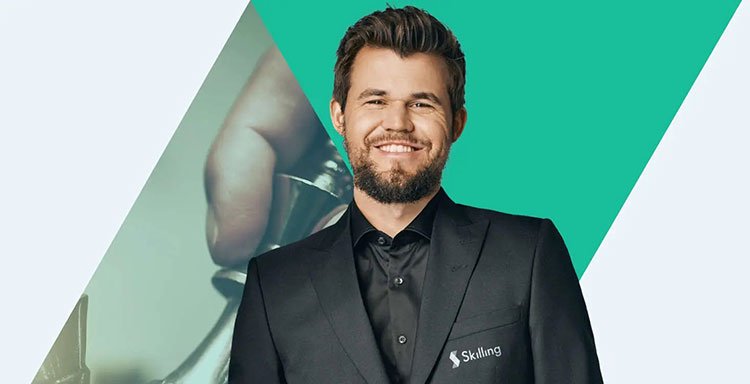 The initial one-year partnership sees Carlsen become the face of Skilling, with tournament sponsorship, television exposure, digital, social and video rights all included within the deal.

Carlsen will wear the Skilling logo on the sleeve of his jacket and shirt during tournaments, while Skilling will also benefit from exposure across Carlsen’s digital and social media channels.

Skilling will also become Play Magnus’ title partner, with the Champions Chess Tour 2021 Tournament 1 to be officially entitled the ‘Skilling Open’ on all Play Magnus broadcasts globally. The tournament is scheduled to run from November 22nd to November 30th.

Most of the world´s top chess players are expected to participate in the exclusive online tournament, with Skilling featured in player’s backdrops when playing matches, and every player hashtagging #SkillingOpen across social media.

The previous Tour was the first online chess event to be distributed across broadcast TV in Europe, Asia, and Russia. The previous Magnus Carlsen Champion Chess Tour captured 70 million viewers.

Securing a partnership with the biggest name in chess is a moment of immense significance for the Scandinavian-owned fintech brand, which, despite only being launched in 2019, is already firmly established in the trading sector, and now counts ‘The Mozart of Chess’ as the face of the Skilling brand.

The Skilling trading platform is user-friendly for beginners, and intuitive for experienced traders, with the aim of bringing transparency, accessibility, and simplicity to the traditionally opaque trading process. Skilling users can trade in more than 800 forex and CFD financial instruments, including currency pairs, cryptocurrencies, indices and popular commodities.