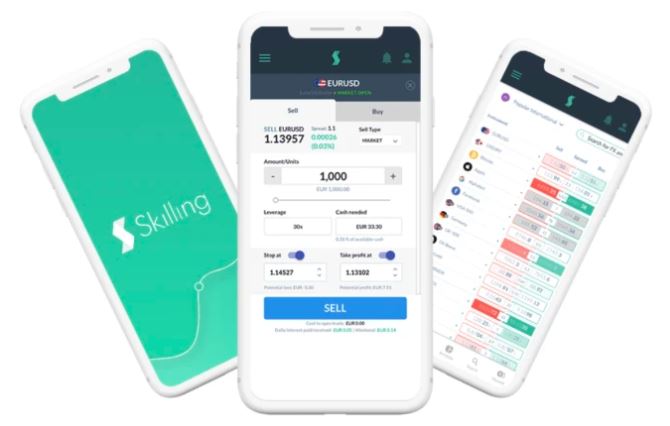 The new Forex and CFD platform is Optimizer Invest’s largest startup venture ever.

Skilling is a completely new type of software and service that will make it easier for anyone who wants to trade in forex, crypto currency, indexes, stocks and commodities. The CEO of the company is Anders Berglund, former CEO of Google Sweden.

The service is primarily aimed at users who have prior knowledge of trading in financial instruments, but also open up for those who are interested in learning more.

Skilling manages trading in both forex and CFDs (Contracts for Difference). The advantage of CFDs is that they can be traded quickly and are very accessible. In addition, it is possible to create profits even when the price of a stock, currency or commodity falls.

Petter Moldenius, CEO of Optimizer Invest, comments:
“The idea behind Skilling is to simplify and improve a trading niche that we believed was too complicated. We have spent a significant amount of time to analyze, design and build this technical platform. Time has now come to launch. It is our biggest startup venture ever, and our hope is that it will get more people to discover the opportunities with trading.”

Anders Berglund, CEO of Skilling, comments:
“Our mission is to make trading simple and accessible, and everything we have built so far has been directed towards that goal. We want to increase accessibility to the world financial markets by combining our user-friendly trading platform with training materials that enable users to continually improve their knowledge and develop as a trader, in simple terms, we want to make trading simple.”

The Skilling Group is run by an organization of about 35 people based in Malta, Cyprus and Spain. In the first phase, Skilling’s platform is launched in Sweden, Norway, Germany and the UK. Further ahead, the plan is to introduce the platform in the rest of Europe, and eventually also globally.

About Skilling
Skilling is a trading platform that offers CFD trading on instruments from markets around the world. The company’s mission is to make trading simple, accessible and transparent, ensuring that anybody who wants to trade feels confident and secure. Forex, Cryptos, Indices, Stocks and Commodities can all be traded on a platform designed to be both user-friendly for beginners and intuitive for experienced traders. The Skilling group of companies includes a multinational workforce of over 35 employees from all over Europe. An extremely talented team of developers, marketers and specialists work together from offices located in Cyprus (CIF), Malta and Spain. Investors behind the initiative include Optimizer Invest, founded in 2012 by Henrik Persson, Mikael Riese Harstad and André Lavold.
www.skilling.com

About Optimizer Invest
Optimizer Invest is a fully founder funded venture capital company based in Malta, established by Norwegian Andre Lavold and Swedes Henrik Persson Ekdahl and Mikael Riese Harstad. The company helps early stage businesses and entrepreneurs to develop and to reach their full potential with profitable growth. The founders and the Optimizer team have a successful background in iGaming, ecommerce and digital lead generation. They primarily invest in consumer-oriented and online businesses. Since the start in 2012, Optimizer Invest has invested in twenty something companies. Optimizer Invest has also launched a foundation aimed at impact investing. optimizerinvest.com

This website uses cookies to improve your experience while you navigate through the website. Out of these, the cookies that are categorized as necessary are stored on your browser as they are essential for the working of basic functionalities of the website. We also use third-party cookies that help us analyze and understand how you use this website. These cookies will be stored in your browser only with your consent. You also have the option to opt-out of these cookies. But opting out of some of these cookies may affect your browsing experience.
Necessary Always Enabled

Any cookies that may not be particularly necessary for the website to function and is used specifically to collect user personal data via analytics, ads, other embedded contents are termed as non-necessary cookies. It is mandatory to procure user consent prior to running these cookies on your website.